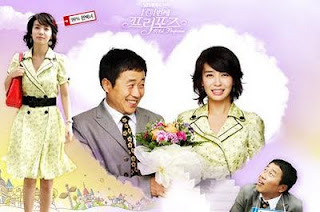 The 101st Proposal aka ‘My Perfect Girl’ stars Lee Moon-Shik as Dal-Jae, one of those old bachelors who can’t seem to get a wife no matter how many 맞선 (marriage meetings) they attend. I mean, he’s got it all: he’s good loo… OK, not really. But, hey, he’s rich… at least inside. And despite his heavy Jeolla Province dialect, he certainly has many charms, it’s just that he’s too damn picky (or is it the other way around?)! But all of a sudden he finds his perfect girl, a 29 year old announcer (Park Sun-Young) who will rock his world. Man, I bet her parents will love her new conquest. Story has been done to death, but this being a Weekend Drama (more time to develop characters, less incentive to use educational ‘shocking revelations’ to make viewers practice new swear words) and having such a good cast, we might be dealing with the closest thing to MBC’s glorious mid-to-late 90s Weekend Dramas like 아파트 (Apartment) or (Roses & Beansprouts) in a while. Shows which took a predictable formula and just let the cast act it out for an enjoyable 50 to 60 Episodes.
Source: twitch