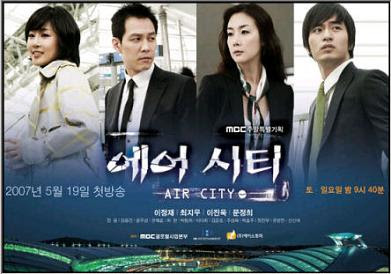 
Han Do Kyung, specially scouted by the Incheon Airport Director, willingly accepted 1/3 of the pay she was receiving when working in Singapore to come back to Korea as the chief of operations of Incheon Airport. She speaks five different languages. However, Do Kyung lives with an uneven wound of her family and a regret of leaving her sister behind. She met Kim Ji Sung, a National Intelligence Service agent and gets entangle with him. Kim Ji Sung is very passionate about his work to the extend that he is willing to bend the rules to ensure the security of the country even if he is only acting on his instincts. After being stationed at the airport, he finds himself in an emotional turmoil with a woman he used to love who is also working in the airport. At the same time, he is falling for Han Do Kyung. Kang Ha Joon, a childhood friend of Han Do Kyung is also falling for Do Kyung. Kang Ha Joon is a quick tempered with a habit of talking aggresively due to his nature of work watching over thousands of surveilance cameras in the airport but has good relations with all the airport employees even the cleaners because of his kind personality outside of work. As his friendship develops with Do Kyung, he becomes a strong source of refuge for her. But as his feelings for her grows, his relationship gets more and more complicated with a woman who is his friend, superior at workplace and unrequited love.
Cast
Lee Jung Jae as Kim Ji Sung
Choi Ji Woo as Han Do Kyung
Lee Jin Wook as Kang Ha Joon
Moon Jung Hee as Seo Myung Woo
Extended Cast
Park Tam Hee as Jang Nan Young
Lee Da Hee as Han Yi Kyung (Do Kyung’s younger sister)
Park Hyo Joo as Im Ye Won
Kwon Hae Hyo as Min Byung Kwan (Do Kyung’s boss)
Joo Sang Wook as An Kang Hyun
Kim Jun Ho as No Tae Man
Kwon Young Jin as Kim Soo Chun
Jang Yong as Mr. Lee (Ji Sung’s boss)
Choi Ran as Choi Jung Hee
Yoon Joo Sang as Eom Ban Jang
Shin Shin Ae as Go Eun Ah
Jung Jin Moo as Min Uk
Lee Sang Yoon as (Do Kyung’s friend)
Kim Yong Hee
Seo Bum Shik
Production Credits
Screenwriter: Lee Sun Hee
Assistant screenwriter: Lee Seo Yoon, Hyang Yeo Kyung, Lee Myung Hee
Producer: Choi Won Suk
Director: Im Tae Woo
Episode Ratings