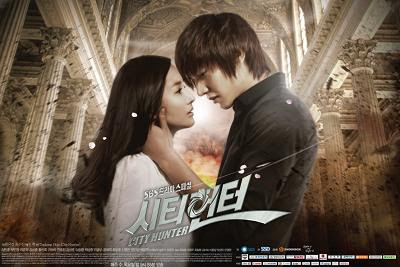 ‘City Hunter’ is an original script based on the world-famous novel by Japan’s Tsukasa Hojo. Since it became public that Korea would be the first remake of this story into a drama, ‘City Hunter’ has been receiving worldwide attention. ‘City Hunter’ has switched the setting from Tokyo 1980 to Seoul 2011, and according to the original story structure, the protagonist becomes a city hunter and his character develops while resolving gratifying cases.
Lee Yoon Sung (Lee Min Ho) works at the Blue House’s National Communication Network Team and received his Ph.D at M.I.T. Kim Na Na (Park Min Young), a former judo athlete who works as a bodyguard for the President’s residence, the Blue House. Kim Na Na will eventually be involved in a love triangle with Lee Yoon Sung and prosecutor Lee Joon Hyuk (Kim Young Joo). The drama also marks Goo Ha Ra’s acting debut and she will play the role of the President’s daughter, Choi Da Hye.

Get the Photos Here:
Official Site