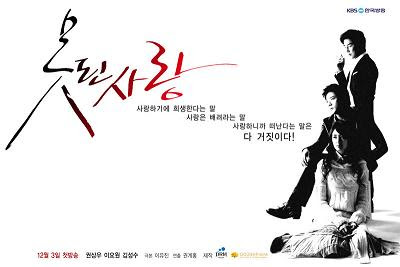 Na In Jung struggles with her love between the rather cold and rebellious Yong Ki and a successful businessman, Soo Hwan. Kang Yong Ki is a pop culture artist. He was separated from his first love, Jo Ann, and still carries the wound that he suffered from their relationship. His half sister is Joo Ran who is married to Soo Hwan. Soo Hwan begins an affair with In Jung but he only has ambition for the CEO position of Yong Ki’s father’s company. Soon after he discovers that his ambition does not fill the emptiness that he has inside and realizes he needs In Jung. But In Jung and Yong Ki have already fallen in love with each other. Will In Jung go back to her first love or stay with Yong Ki?