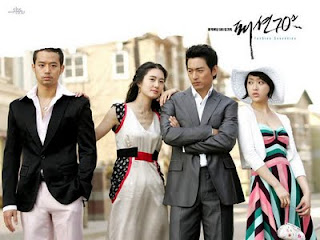 
Fashion 70′s focused on the lives of four young people, from their childhood during the Korean War, to their careers and love lives within the booming fashion world of the seventies. When Joon Hee was young, she befriends a little girl called Kang Hee, this two girls always get into trouble because of Kang Hee’s greedy mother. At the same time, Joon Hee also makes friends with two boys, Dong Young, the son of a military general and Jang Bin. But when North Korean forces invade their town, both girls are separated from their parents and Joon Hee’s mother is killed in an explosion. Believing his daughter to have died, Joon Hee’s father adopts Kang Hee and raises her as his own daughter. Joon Hee is discovered at an orphanage by Kang Hee’s mother, and is also adopted. The trauma of the events causes Joon Hee to block out her childhood memories and she grows up on a small island as Doe Mi, unaware of her true identity.

Years pass and their paths cross again, with complicated and destructive results. Doe Mi dreams of becoming a fashion designer, and petty criminal Jang Bin helps her move to Seoul to chase her dream. In the process he falls in love with her, but his feelings are unrequited…